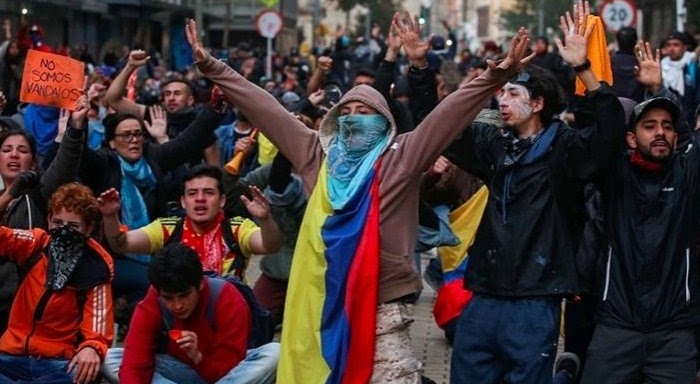 Anger over a tax reform proposal has spread to include economic frustration, rising inequality, the scarceness of Covid-19 vaccines, and police violence. Colombia has been roiled by nationwide anti-government protests for more than two weeks, with the city of Cali emerging as the epicenter. The demonstrations were initially sparked by anger over pandemic-related tax reforms but have since intensified and spread, tapping into a long-simmering fury over police violence amid growing inequality and disparity.

REASON FOR THE PROTESTS:
The National Unemployment Committee, made up of unions and labor organizations, called for protests on 28 April against a tax reform proposed by Duque to address a deficit resulting from the pandemic. The proposal would have raised taxes on household products like milk, eggs and meat, and gasoline and utilities.
While the now-suspended tax reform triggered this year's protests, they are a continuation of nationwide anti-government demonstrations which began in November 2019. Back then, hundreds of thousands of people took to the streets after a call by an umbrella group calling itself the National Strike Committee. The same group is behind the current protests, and its demands are as varied as the people joining in the marches. One of the issues which have most angered protesters is the actions of riot police.
The government took steps to ensure the return of peace in Columbia.
President Duque demanded that the protesters lift all the roadblocks they have erected before the government can consider any concessions to the protesters. President Duque announced that he would deploy 7,000 troops to clear the main highways. The president has also ruled out one of the protesters' main demands - the dismantling of the riot police, meaning that the talks between the two sides have all but stalled. The government has been holding interviews with protest leaders, but with more and more groups joining in the demonstrations, the demands of those who have taken to the streets have widened, and a quick resolution seems unlikely.
Human rights groups reported that riot police had not only used tear gas to disperse protesters but, in some cases, shot live ammunition. Footage shared on social media showed violent clashes, and on 3 May, the ombudsman's office confirmed that 16 civilians and one police officer had died since the protests began.

RESPONSE OF UN The U.S.,
United Nations, and European officials have called on the government of President Iván Duque to exercise restraint. The government counters that police respond to leftistguerrillas and other armed groups that it says have infiltrated the protests. They've produced videos of their own that allegedly show "urban terrorists" attacking police stations.

ROLE OF SOCIAL MEDIA
Social media, however, has made it possible to document the repression by security forces, particularly from the Colombian Mobile Anti-Riot Squad (ESMAD), which has been singled out for various incidents, such as the death of 18-year-old Dilan Cruz during a November 2019 national strike, and more recently the death of Nicolás Guerrero, a 21-year-old activist who was shot in the head during demonstrations in Cali.