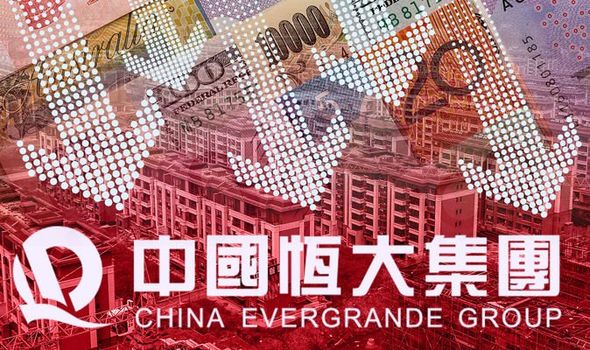 In recent months one of China’s biggest real estate developers, Evergrande, had to beef up private security outside its Headquarters in Shenzhen, China. This unusual move by Evergrande was made in response to increased protests by small investors, unpaid suppliers and people distressed with incomplete houses that they had already purchased. A rare sight to see in a country like China where protests of any kind are met by brutal repression by the top-down tyrannical Communist government. Several viral videos that managed to trickle out of China showed exasperated common Chineses citizens inside the Evergrande headquarters raising slogans like ‘Return Our Money’, while some lay helplessly on the building floor. The situation those people were in could be summed up by what one disconsolate Chinese woman could be seen saying in the video, “Do you think it’s easy for us ordinary people to earn money….we sold everything we had, both of our flats so that we could buy one of Evergrande’s properties”. This crisis in China could have serious ripple effects across the globe as the Evergrande group has incurred debts to the tune of 305 Billion USD, mostly from global financial markets. This has left several worried investors and economists thinking about whether the Chinese government will bail Evergrande out of this crisis or is this the beginning of a new global financial crisis just after the Covid health crisis.

Evergrande was established in 1996 by Hui Ka Yan in Guangzhou city. Being the largest property developer in China, it ranks second in China in terms of its property sales. It owns more than 1300 residential projects in China which are spread across 280 cities. Albeit its main business is in real estate the company also has investments in electrical vehicles, insurance, theme parks and even bottled water. The company also owns a football team titled Guangzhou FC which is credited for building the world's biggest football school and also has a stadium that is under construction.

Evergrande borrowed huge sums of money from financial markets to fund most of its projects because of which its debt burden has increased. It has since accumulated more than 300 billion USD in debt which has made Evergrande the most indebted developer in the world. Just to put this in perspective, we can compare this to Russia, one of the world’s most powerful and influential countries, which owes a national debt of 275 billion USD. Homebuyers in China who have paid for a staggering 1.6 million flats, now are vulnerable to be directly affected by this crisis as those houses are still yet to be built.

This crisis also stems from the three red line systems developed by the Chinese government to improve the financial health of the real estate sector and to curb excess borrowing. The first condition or so-called red line is to maintain a liability to asset ratio of less than 70%, the next line is to maintain a gearing ratio of less than 100%, and the third line is to have a cash to short term debt ratio of 1%. If any company crosses all these three lines, which Evergrande does, then the company is restricted from borrowing more money. The signs of a potential collapse of Evergrande could be traced back to as early as 2018 when Evergrande was flagged as a risk by China’s central bank. Besides being at the mercy of these policies other factors that led Evergrande to this was that a few years ago a lot of China’s acquisitive companies were forced to downsize themselves following the debt-fueled shopping sprees these companies were on. Evergrande also stated that it was facing trouble finding buyers for its assets. Recently Evergrande halted paying its investors and suppliers and pausing most of its housing projects. The company has even landed up in a situation where it is finding it difficult to pay the salaries of its employees.

The Domino effects of this crisis are many. Homebuyers are already in the process of paying mortgages on projects that have been suspended. There are 125 financial institutions and 121 non-financial institutions with liabilities that will face serious consequences of the Evergrande collapse. On the side of the suppliers, one of the examples is the Japanese toilet making company Toto, which made 30% of its profits from China in 2020, would also be a victim of this downfall. The air conditioner company Daikin which gets 25% of its earnings from China is also poised to face a huge crisis. Along with them there are a lot of small and medium-sized real estate developers in China, dependent on Evergrande and supplying them which together amount to 10 to 15% of the total market. The real estate business in China accounts for 25% of China’s fast-growing GDP, and any downfall in that sector will send financial shock waves across the globe.

But for now, only time can tell how this crisis unfolds.